It’s a trio that doesn’t make too much sense: a big burly senior from New Jersey with hockey in his blood, a tattooed hometown kid with everything to prove and an undersized, former healthy scratch from the home of hockey. Sure, they were all NHL draft picks, but none of them were selected prior to the fifth round.

So how did they become the best line in all of college hockey and cement their legacy as three of the best players to ever don a Northeastern sweater? If you ask any of them, they’ll probably give all the credit to the other two. But the truth is, these three had the chemistry all hockey players dream of, and three play styles that meshed together perfectly.

“Sikky and I have been playing together for three years, and have just been clicking,” Gaudette said. “Noles was on our powerplay and just switched to our line this year. We’re real comfortable out there together and real confident.”

Stevens was the power forward who was never afraid to mix it up around the net. Gaudette was the sniper who goalies across the country feared. Sikura was the slick-skating playmaker with some of the best hands in the NCAA. With so many different ways to score, it almost became a certainty that opposing teams would be swiping the puck out of their own net when these three marauded the ice.

In their careers wearing the Red and Black, the dynamic trio combined for 183 goals and 223 assists for a total of 406 points. Though they didn’t all play on the same line until this year, each dominated no matter who he played with. It certainly didn’t hurt putting them on the same line, however.

Each wrote his own chapter, but together they created a story that would change the landscape of hockey on Huntington Avenue. 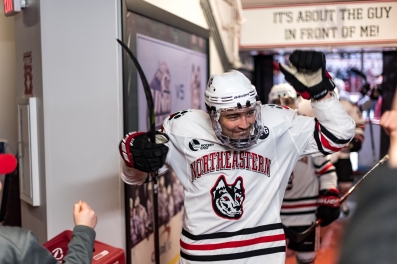 Nolan Stevens watched as the puck sailed into Northeastern’s net 50 seconds into overtime of the 2015 Beanpot championship against Boston University. He was just a freshman, but he was on the ice for the penalty kill that proved fatal. He lost a puck battle on the boards, and the puck found the stick of now-Boston Bruins defenseman Matt Grzelcyk, who made no mistake from the point.

Stevens witnessed the Beanpot torment continue for Northeastern as the Terriers celebrated on the still-smooth ice of the TD Garden. He was the only one of the Huskies’ now famed trio to be on the ice, with Sikura on the bench and Gaudette still playing in the USHL for the Cedar Rapids Roughriders. But they all felt it, even Gaudette, from 1,200 miles away.

“I’ve been going to Beanpot games with my dad ever since I could remember,” Gaudette told GoNU. “I always wanted to go to a Beanpot school. It’s definitely something special.”

When the three of them stepped on the ice for the first time together the next year, they all had the same goal: win as much as possible, no matter what it took to get there.

“We knew that it would take a year or so for some of them to develop,” head coach Jim Madigan said. “Nolan Stevens came to us as an 18-year-old, and he had to develop. Dylan Sikura came to us as a 19-year-old, but he was still physically immature at 150 pounds.”

The three, along with Hobey Baker candidate Zach Aston-Reese, led the Huskies to a Hockey East championship in March 2016, capping a magical second-half run that ended in a raised banner in Matthews Arena. Ask any player, coach or fan: this was the turning point. There was finally some silverware being brought back to Huntington Avenue, and a winning culture was being created inside that Husky locker room. With the nation’s leading scorer graduated in Aston-Reese, it was up to those still on campus to carry that momentum into the following years. 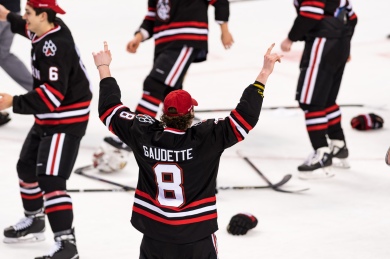 It had been 30 years since Northeastern University last won a Beanpot championship. They had been close; in fact, they had been as close as you can get, losing in the championship game nine times since 1988.

However, from the very beginning of the 2017-2018 season, there was a different feel with this Northeastern team. The team had the skill, they had the fight and they had the leadership. A trophy-less season wouldn’t be acceptable. This team was too good, and everybody knew it.

“It’s a new year and we’re a different team this year,” Sikura said.

With 30.1 seconds left on the clock, the puck was flipped out of the Huskies’ defensive zone, squeezing past Boston University defenseman Chad Krys. Gaudette raced down the length of the ice, beating the two Terrier defensemen to the puck. He lifted the stick of Krys, and in one motion swiped the puck into the Terriers’ vacated net. The goal horn sounded, and Gaudette into his teammates arms.

At that point, everybody in the TD Garden knew it: the Beanpot was on its way to Huntington Avenue.

Their gloves, helmets and sticks went flying, and the Huskies piled onto freshman goaltender Cayden Primeau. Northeastern had won the Beanpot for the first time since 1988, and it meant everything to the guys on the ice and the fans and alumni occupying the TD Garden.

“Winning a championship does a whole lot for your team,” Stevens said. “Coach said before the game, ‘Win a championship and you walk together forever’.

The Huskies would receive an at-large bid to the NCAA tournament, squaring off against the University of Michigan in the regional semifinals in Worcester. Though the game didn’t go the way they wanted it to, it capped off a season that transformed the program.

“It just goes to show how Northeastern is compared to other teams now,” Gaudette said.

The team was special, and almost felt destined to accomplish something special. Led by the trio of Stevens, Sikura and the first Hobey Baker Award winner in program history, Gaudette, they accomplished something no Huskies team in 30 years had.

The big burly power forward, the slick skating undersized playmaker and the sniper from Braintree, Mass. will all go down in the history books at a school they called home, in a city they called home. They will all go on to play in the NHL, the pinnacle of the sport they have played all their lives.

If they happen to forget all they did during their time on Huntington Avenue, all it takes is a simple visit to Matthews Arena and a long glance up to see the banners they helped hang.